From Galway Around the World and Back Again – An Interview with an IMS Employee.

Take us back to the start Denise – when did you know you wanted to work in business?

I can remember from back when I was a child, I used to flick through magazines and find any businesswoman in a suit – it was always a suit in those days – and carrying a briefcase.

I used to picture myself as that person.  I always said that one day that would be me. I also had a fixation with France – my aunt used to come home regularly from France where she lived, and I was obsessed with the “Je ne sais quoi”. From a very young age I declared to my mum and dad that when I grew up, I’d live and work in France! 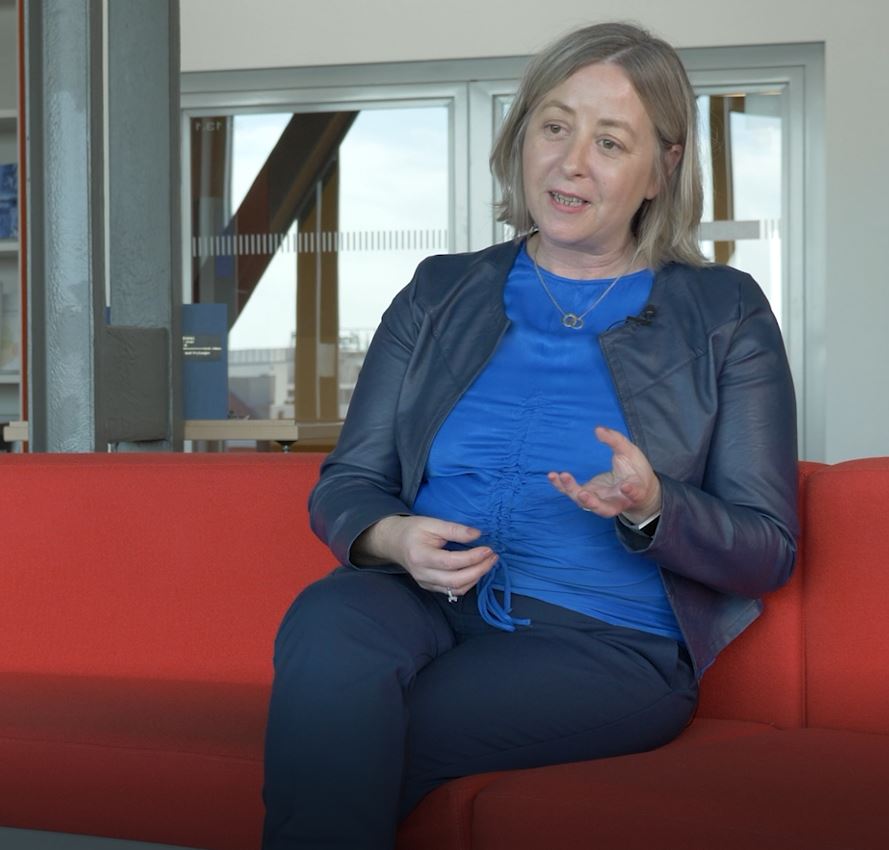 It did – I didn’t know at the time, but I was using the power of imagination and visualisation! I studied Business and Hotel Management in GMIT, then went to France and Switzerland at age 19 for a year to study and work. By age 22 I was managing the conference and banqueting division of a large hotel, managing a team of people – dealing with business conferences during the week and weddings on the weekends.

Anyone who has worked events will tell you it’s long hours and fast-paced, so by 25 I was feeling a bit burned out. I went to a recruiter looking for a role in marketing, PR and strategy which were my favourite subjects during college. They got me an interview with an international Swiss-based tech company that developed digital TV set-top boxes and software for the B2B broadcast industry.

The company were looking for somebody who had minimal technical knowledge but excellent communications, PR and language skills. The idea was that this person would be able to decode what the engineers and product developers were saying about the product and technology and be able to communicate that to an audience in simple terms with minimal tech jargon.

The company went IPO on the Swiss stock exchange in 2005 and after a series of mergers and acquisitions we quickly grew to 1000+ employees worldwide.

That must have brought some interesting experiences and challenges?

It was an incredible experience. As one of the key people in the marketing and communications team, we had to adapt quickly to another way of working while being extremely vigilant with everything we communicated to the external world. Overnight, I went from communicating with industry press and peers to additional audiences of business and financial press, shareholders, analysts and so on.

In the decade I worked with that company, I grew from an initial role as marketing assistant to manager and then as Senior Marketing Communications Manager for the EMEA ANZ regions. We also delved into the consumer electronics market when Europe began to switch from analogue to digital TV and so the audience, I communicated with expanded once again to include TV channels, consumers and well-known consumer tech magazines.

To put this in context: when I started first in the broadcast TV industry it was in its digital naissance – analogue television was still how the masses watched TV, and digital TV was just on the way. DVRs, Internet TV and streaming media came along later. I’m giving away my age now…!

I spent a lot of my 20’s and 30’s on a plane, going from one country to the next, dealing with many different cultures and business styles. You think there is one way to do business but that’s not even close to being true – the way you communicate with Western Europeans for example is totally different to how you communicate and forge relationships with Eastern Europeans, Asians, etc. In Italy and Spain, you need to build a solid relationship and that takes time – nothing gets done until they know and trust you. In Switzerland and Germany, it’s more formal and direct with less small talk – you get down to business quite rapidly. Understanding these nuances is the big difference maker when working with different cultures and when you consider that in the EU alone there are 24 different cultures and languages that make business more than interesting!

Were there any downsides to such a high-flying lifestyle?

Well, when we went from being a private to a public company, things changed hugely. Everything became much more tightly controlled – we were no longer answerable just to ourselves and our customers, we were now answerable to the shareholders and legal regulators.

There were so many rules and regulations to adhere to. I felt that the company culture changed from being a relaxed and enjoyable environment to one where everybody was almost afraid to make a mistake. But this is understandable to a degree – a mistake as a private company could lose you a customer. A mistake as a public company could mean sanctions and penalties.

There were two years where I travelled a lot and spent half my life in airports and hotels. My family always say that I’ve seen the world, when in reality it was mostly airports, conference venues, hotels and busy offices.  I had a daughter at that stage, and I missed a good chunk of the first two years of her life. My dream of being an international businesswoman had come true, but it had come at a price. It was time for me to change and review what I wanted out of life.

So, I eventually moved home to Ireland and set myself up as a freelance consultant, working with my European network of contacts in the broadcast technology world.

Was it hard to adjust back to life in Ireland?

It was really hard. Irish culture is totally different to Swiss culture. In Switzerland you give a deadline, and you meet it. In Ireland “we’ll get it done soon”. This still drives me a bit crazy at times to be honest but it’s just one of those things that I’ve come to accept!

Soon I had a group of small Irish clients, but my major work was with a dubbing and subtitling company in London and an agency partner in Amsterdam. This was my first taste of the agency approach – lots of projects, lots of balls in the air, multiple clients, brands, and objectives. It’s fast-paced too but not in the “complete lifestyle dominance” sense of my previous jobs.

From 2015 I was working remotely from home for the most part, other than a few stints over to Europe and in 2018 I realised I had become very isolated. Nobody knew my name in the Irish industry – I had no network here. So, I figured something needed to change again.

And that’s where IMS comes in?

Correct. When I decided to make the next change I hopped on the internet, googled B2B agencies, and found a B2B agency in Oranmore only a few miles from where I was living. It shows you how disconnected I had become that there was an international B2B marketing agency only down the road from me and I wasn’t even aware of them.

As luck would have it, they were recruiting for a Client Marketing Manager role, so I applied, got a phone call from Kevin, the owner, that same day, was hired and at my desk about two weeks later.

I’ve been in IMS since then, working with clients from a broad range of B2B industries. I love the variety the work brings. I love learning about new industries and niche products and applying an international focus to the clients’ objectives.

What’s the one big thing you’ve learned throughout your career that has stuck with you?

It’s hard to pin it down to a single thing! Being lucky enough to work across so many markets and cultures has been invaluable in building my own skills and abilities.

If I had to give one thing though, I think I’d have to say mentorship. I’ve been incredibly lucky throughout my career that I’ve always had people around me who believed in me before I believed in myself. I think that’s crucial – when you’re young you live with permanent imposter syndrome! You haven’t even gotten yourself figured out as a person yet, and you’re trying to forge a path for yourself through a pretty relentless industry. To have good people around you to give you guidance and support when you need it is absolutely vital, and I’ve always benefitted from that and still do.

In fact, in 2019 I did a diploma in Executive Coaching as I believe so greatly in the power of mentorship and coaching. I’m also a voluntary mentor with Bizmentors in Galway, mentoring startups and small businesses in the Galway/Mayo region.

And finally, what’s one piece of advice you’d give to a young person starting out on their career path today?

When we leave college, we have the degree and the lingo, but we don’t have any core “on the job” experience so don’t be afraid to ask for help and admit when you don’t know something; be humble and honest and people will help you.

Stick with the winners, trust the people who believe in you until you believe in yourself, and finally, surround yourself with people who will tell you as it is – the good and the bad! There’s always room for improvement and growth no matter your age or experience.

Check out our other employee interviews here.

This article is about Employee Interviews